To create a prosperous, sustainable, vibrant and healthy Northern Australia.

To deliver industry-led research and development collaborations which de-risk  the development landscape and enable the sustainable economic growth of Northern Australia.

Our Constitution is available to read here.

Research activities can be located outside of this area as long as the impact of the research falls within the Northern Australia jurisdiction as shown below.

The CRCNA brings together industry, universities and other research bodies, regional development organisations, all northern jurisdictions and international partners in a collaborative industry-led R&D venture to assist businesses, governments and researchers identify opportunities for business and growth in the north to deliver an evidence-base of information to support and inform the developing northern Australia agenda for the benefit of all Australians and achieve the following :

4. Deliver research, development, and extension solutions with impact – leverage grass-roots level RD&E effort, capacity and knowledge of northern Australia to ensure solutions are implemented in a meaningful way and to the benefit of all Australians.

It is our aim that by achieving the above, our research collaborations will deliver high impact research which lowers investment barriers and enables significant capital to flow to support: 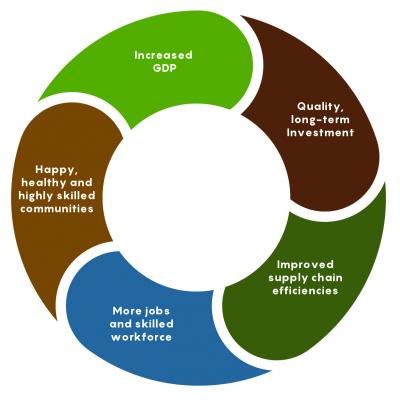 Mr John Wharton AM was appointed as Interim Chair of the CRCNA in November 2015 to consult with stakeholders and develop a proposal for consideration by Government to establish the CRC. Mr Wharton undertook extensive consultations with industry, research and government from December 2015 to 31 March 2016 and provided his proposal to the Australian Government on 5 August 2016.

On 20 February 2017, the Australian Government appointed the inaugural CRCNA Board and in April 2017 announced Townsville would host the CRCNA’s Head Office.

The CRCNA’s Head Office is located in Townsville with regional offices located in Broome, WA and Darwin, NT.